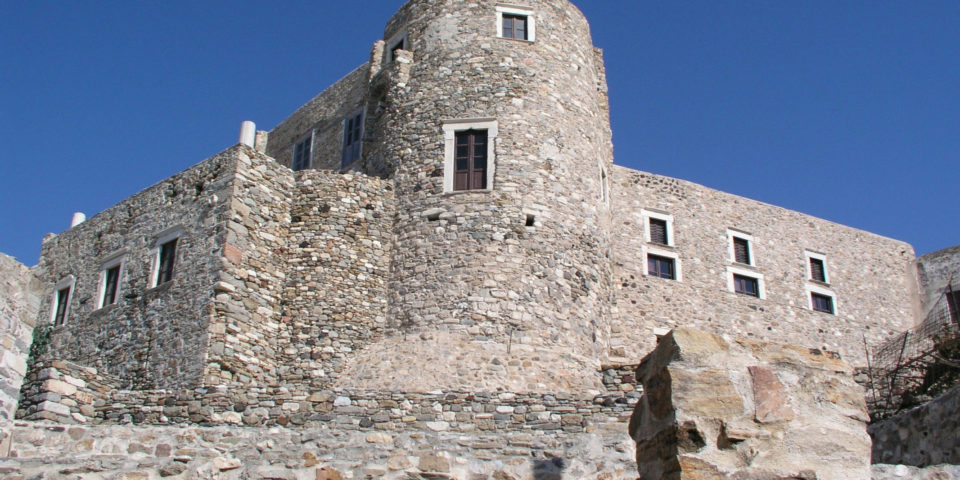 The Catholic Cathedral in Naxos’s main town, Chora, was built in the medieval era. It went through various construction phases before taking its final shape in the 17th century. Its marble floor is richly decorated with 17th and 18th century memorial stones depicting the family crests of some of the most prominent Catholic families that were active on the island from the 16th century onwards. A double-sided icon, depicting Virgin Mary and St. John the Baptist, stands amidst an abundance of baroque-style décor in the central podium. Dated back to the 12th century, it is older than the cathedral itself. Other icons reveal the fusion of Byzantine and western styles under the influence of the Venetian-Cretan school, from which the celebrated artist and architect El Greco, born Domenikos Theotokopoulos, emerged.

Panagia (Virgin Mary) Theoskepasti, Kastro’s Orthodox Church, is located directly behind the Catholic Cathedral, and next to the Catholic Episcopal Palace. This church is double-aisled, its section to the right dedicated to Virgin Mary, and the side to the left to Agia Anastasia Pharmakolytria (Deliverer from Poisons). This may well be the oldest of the citadel’s surviving monuments and its heritage includes the “Theoskepasti Codex” and double-sided, portable icons.

Of medieval Kastro’s estimated twelve towers only one remains.
According to local legend, this surviving monument, known as the Crispi Tower, served as the palace of the dynasty of the same name.
In actual fact, however, it was the private mansion of the illegitimate son of Duke Guillermo II Crispo (r1453-63), Jacobo, who did not have hereditary rights to the dynasty but briefly served as governor in 1494.
These days, the tower serves as a Byzantine Museum, as had been specified by the monument’s last private owners, the P. Glezos family, when they donated the tower to the state.
The tower is also known as the Glezos Tower, or Aperathitissa –derived from Apiranthos, the donor family’s hometown. The lintel at the tower’s entrance is adorned with rather unusual heraldry that combines both Ottoman and Russian elements.
It pertains to diplomas in recognition of services offered to the two great powers in the late 19th century by one of the tower’s lords, Iossif Barozzi, an official in the service of Russia.

The Capuchin monastery is located east of Theoskepasti church, close to the Piso Paraporti gate of Kastro. The monastery’s church, dedicated to San Antonio di Padua, is single-aisled with impressive icons, while its marble flooring is decorated with the coats of arms of nobles such as the Coronelli-Castri and Lorentani-Crispo families. The Capuchins reached Naxos in 1628. The church also served as a school. The monastery’s codices, which have survived, offer an important account of its history, as well as the history, life and adventures of the entire castle during most of the period of Ottoman rule

The Capella Kazatza church is located at Kastro’s highest point, next to the School of Commerce. The local tradition considered Capella Kazantza to be the  chapel of Marco Sanudo –the Venetian conqueror of the Cyclades in the 13th century- but it was actually built in the 14th century. The School of Commerce is considered certain to have been established thanks to Capella’s strong financial standing –further bolstered as a result of donations made by worshippers from the 17th century onwards.

The School of Commerce was initially a monastery for Jesuit monks who settled on Naxos in the early 17th century, guided by French diplomacy and foreign policy in the Levant.
The Jesuits assumed the task of establishing a school for the religious and social education of Naxos’s young Catholics.
They went on to acquire a significant amount of property on Naxos, and are believed to have introduced oranges to the island, at their resort in the Kalamitsia area, near Melanes.
The school operated without interruption under the Jesuits from 1628 to 1773 when, following initiatives by King Louis XVI of France, administration was transferred to the monks of the religious order  of Saint Lazare (Lazaristes) –until 1887, when they departed from Naxos.
Salesian monks assumed control of the school in 1891and organized it on modern standards, converting it into a School of Commerce.
The celebrated Greek writer and philosopher Nikos Kazantzakis studied at this school as a teenager in 1898. The school gained huge fame but eventually had to close down, permanently, in 1927, three-hundred years after its establishment.
The Ursuline School began operating in 1739, but efforts to establish a girl school were first made a century earlier, by Frenchman Robert Saulger, the Jesuit superior at Naxos. The property was purchased by the Greek state in 1986 and has since served as a cultural institution.

A footpath starting at Tsikalario leads to Apano Kastro, built on a rocky hilltop, it was an important fortified position from antiquity to Venetian times.The remains of the huge wall, with the big, rectangular stone blocks, obviously belong to the classical era, while the fort that can be seen today was built by the Venetians around the middle of the 13th century.

An impressive complex that was built as the summer resort of Jesuit monks in the 17th century is seen at Kalamitsia, between the settlements of Melanes and Potamia.Construction of the complex was funded by the family of the head of the Jesuit order himself, Robert Saulger. Being a distinct mixture of western and local architecture, it includes many rooms, a chapel, auxiliary buildings such as dovecote, stable and olive mill, and a huge garden featuring terraces, bearing walls, cisterns and flights of stairs. Due to the luxury that characterized it, it was dubbed as “the Jesuit palace”.

Zevgoli Tower, a two-storey Venetian-era stone structure that has been renovated and is now inhabited, is located close to the center of Apiranthos. his impressive monument, built on a rock at the village entrance in the 17th century, was originally owned by the Castri family, then by the Sommaripa family. The tower features Aegean-style arches and many verandas and balconies.

One of the island’s oldest fortified towers, dating back to the 14th century, is found in Kourounochori.The three-storey building is surrounded by courtyard and features bastions, murder-holes for thwarting attackers with scalding water, and cages.A marble table is found on the veranda, bearing the inscription “1727 D.R.SCNOSPA” –a remnant from past Venetian owners of the tower, the Sommaripa family.

Behind the Church of Panagia Protothroni in Chalki, there is the 17th century Barozzi-Gratsia Tower. The monument comes in three levels, with strong walls, iron-barred windows, heavy wooden gates, wooden drawbridge, murder hole to thwart attackers with scalding water and coats of arms.