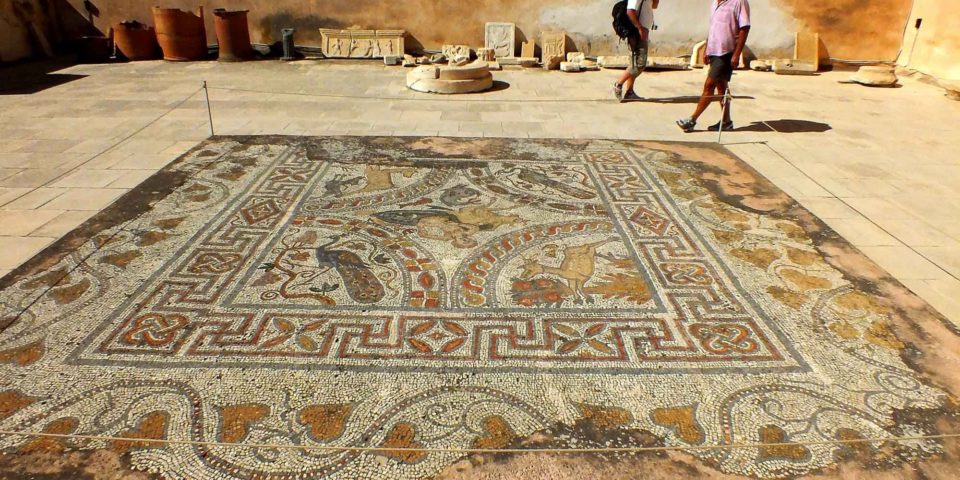 Portara, a huge marble gate and the single remaining part of an unfinished temple of Apollo of 530 BC, is Naxos main landmark. Standing on the islet of Palatia, at the entrance to Naxos harbor, it comprises four marble parts weighing about 20 tons each.Its construction was initiated by the tyrant Lygdamis in the 6th century BC.It measured 59m in length and 28m in width, and its entrance was on the western side –an unusual feature for an Ionian-style temple.The monumental gate seen today, which led from the vestibule to the main part of the temple, lies amidst traces of its foundations and those of a peripheral colonnade that was never completed.An arched Christian church was built on the ruins in the 6th or 7th century.The islet of Palatia has been associated with the worship of Ariadne — a Cretan princess — and Dionysus, the god of wine and merriment. Because, according to mythology, Dionysus abducted the princess at the beachside of Palatia, the islet is considered the place where Dionysian festivities were first held.

Excavation work has led to the discovery of part of Naxos’s Mycenaean-era capital, dated 1300 BC, on the northern side of the harbor, below Mitropoleos Square. The section discovered constitutes part of the ancient agora and settlement. It is considered likely that the city’s acropolis (citadel) during Mycenaean times may have been located on today’s Kastro hill. The period’s large cemeteries are located at the Aplomata position as well as Kamini, further eastward. Some ancient constructions are seen submerged into the sea today.

One of the most important sanctuaries of ancient Naxos, dedicated to the god Dionysus and possibly a female deity of nature, was operated at Yria, south of Naxos town and in the middle of the fertile valley of Livadi, between the 14th century BC (Mycenean era) and the Roman period. Worship was conducted outdoors up until the Middle Geometric period (850-750 BC), when four sequential buildings were constructed with the same orientation. The last of all buildings at the site, a monumental temple constructed around 580 BC (Archaic period), has been restored.The Yria temples provide unique and full evidence of the birth of Greek marble island architecture.This temple was converted into a Christian basilica in the 5th or 6th century AD.

At the fertile valley in the Gyroulas district, south of the village of Sagri,  the inhabitants of the area began worshipping (outdoors) the deities of nature in the 8th century BC. A monumental, all-marble temple was constructed at the spot in the late 6th century. According to a number of indications, the sanctuary was dedicated to the deities of Apollo, Demeter and Kore.The worshipping of earth deities, which was related to fertility and the growth of vegetation, is deduced by the erection of the sanctuary in the midst of an area rich in productive resources and appropriate mainly for farming. During the paleo-Christian period (5th-6th century AD), the temple was converted into a basilica.

As early as the Archaic period, Naxiots tapped the rich sources of Flerio, Melanes in order to solve the water problem of Naxos city. The first aqueduct (late 6th century) comprised clay pipes laid in a ditch. The second, constructed during the Roman years, features two clearly distinct phases and comprises a pipe built with hydraulic mortar, with underground and elevated sections. Both aqueducts, following the same course, began from a source that can be seen under a later construction crossed a distance of 11km and ended at a point in the city that has not been determined.The elevated Roman-era aqueduct would have probably ended at today’s Trani Fountana –a cistern constructed during the same period. Maintenance shafts that also served as water collectors existed along the aqueduct. The importance and degree of technical difficulty in the construction of the project is indicated by the fact that a 220-meter tunnel had to be dug through the mountain between Flerio and Kampones, in order to tap a source in the latter area.

At the center of Flerio is a sanctuary dedicated to the female deity of the fertility of the earth, and to the twin brothers Otus and Ephialtes. Worship here began around 800 BC and continued intensively up to the 6th century, gradually declining later. The sanctuary became the favorite place of worship for the laborers in the neighboring marble quarries.

One of Naxos’s two main marble quarrying areas in antiquity is located in the greater Flerio area.The locale is replete with remnants of quarrying activity (wedge-slots, rectangular wedge holes, series of small circular holes made with chisel, abounding marble rubble) but the main attraction is the two oversized but incomplete freestanding stone figures of unclothed young men (Kouroi), dating to the early 6th century BC.

Chimarros Tower at Filoti is considered one of the important ancient monuments of the island. Built on a hilltop by the Kalantos road. Researchers believe the tower dates back to the late 4th century BC and view it as a fine example of Hellenistic-era defense-related architecture. Constructed with huge marble boulders, it was circular and its original height measured  approximately 20m with a 9.2m diameter at its base.