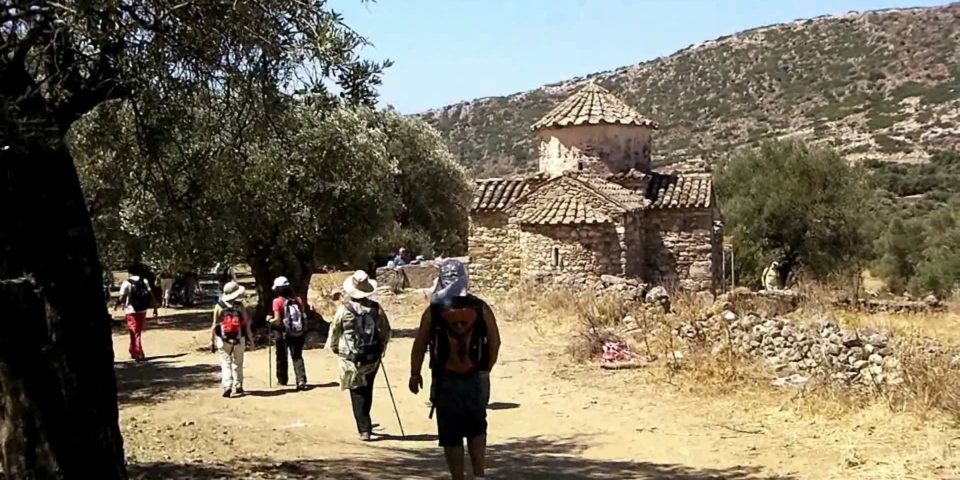 The Agios Eleftherios monastery stands on the southern side of Sagri village. The monastery is comprised of its central church and a two-storey section that served as accommodation for monks and – in ensuing years, during Ottoman times – as an educational facility. The monastery’s altar features fascinating icons, as the icons of Agios Eleftherios, Pantocrator, Agios Artemios, as well as Panagia (Virgin Mary) Eleoussa. The monastery’s grounds include storage rooms, cells, and a large hall, once used as a classroom and library.

The fortified monastery of Timios Stavros (also known as Bazeos Tower by the name of the family who now own it) in the Agiassos valley, outside the village of Sagri, is one of Naxos’s most characteristic monuments. The name of the nearby village is a corruption of Sainte Croix (French for Holy Cross –or  Timios Stavros in Greek).Built as a fortified monastery around 1600, Timios Stavros was abandoned by the last group of monks in the early 19th century. In 1834 it became the property of the newly-founded Greek state and for many years it hosted families of potters who lived and worked there. Around the end of the 19th century the tower was sold by the Greek state to the Bazeos family, The tower has been restored and every summer since 2001 it hosts the Naxos Festival.

The Church of Panagia (Virgin Mary) Protothronos at Chalki is one of Naxos’s oldest and most important religious monuments.Initially built in the early Christian period as a three-aisled basilica, it was converted into a cruciform, domed church in the 9th century. Two additional aisles were built later.The interior has five layers of frescoes, of the early Christian period, non-pictorial of the iconoclastic period of the 9th century, and of the 10th, 11th and 13th centuries. The fresco in the alcove of the altar depicting Virgin Mary with a spindle is considered unique in the Balkans. According to tradition, the church was named Protothroni because it was the first to be built on Naxos, and has been proven to have been in uninterrupted service since 1052.

The Church of Panagia (Virgin Mary) Drossiani –a short distance from Moni, on the way to Chalki- is one of Naxos’s oldest. The church, part of an old monastery, has a unique architectural style, with bare stone-walls, a three-part attic with dome and three adjoining chapels on the northern side with square dome bases on their roofs.Some of the frescoes that have been saved date to the 6th century and are considered among the oldest in the Balkans, while the rest belong to the period between the 11th and 14th centuries.

Photodotis is Naxos’s oldest and perhaps most important fortified monastery.Located at an altitude of 500m, north of the village of Danakos and amidst age-old oak trees, fig trees and vineyards, the imposing structure was built on the ruins of a 6th century basilica some 300 years later. The monument comprises two floors. The ground floor is taken up by the three-aisle church. The dome is supported by four marble pillars and the marble iconostasis bears elaborate sculptures. One of the two rooms on the right of the main church was most likely a crypt.The first floor, which is accessed via an external, stone-built staircase, features an atrium dominated by the dome. This is surrounded by the abbot’s quarters, monks’ cells and bastions. The church is dedicated to the Transfiguration of the Savior.

The monastery of Agia is built on an idyllic site at an altitude of 220m, just 6km away from the village of Apollonas. The main church of the monastery is a vaulted basilica with three aisles, separated by pillar-supported arcades –a usual style in early Byzantine religious monuments. In the forecourt of the monastery there is a spring embraced by enormous age-long plane trees. The monastery was conquered by the Franks in the early 13th century, but it was given back to the Orthodox Church in 1559, when the Turks were dominating the Aegean Sea.

The monastery of Faneromeni is built in the form of a Venetian tower and it is situated on a hill overlooking the whole northwest coast of Naxos. The monastery came under the direct authority of the Ecumenical Patriarchate of Constantinople in the late 16thcentury and consequently enjoyed special privileges during the years of the Ottoman rule. It realized its heyday, however, in the early 19th century, when it founded the first two schools of Naxos, in 1829.The monastery, dedicated to the Assumption of the Holy Mother, has an abbot and one monk today.

Towering on a steep hill over a fertile plain between Sagri and Agiassos, this important Byzantine castle Apalirou offers visitors fabulous views of the island’s entire southwestern coastline.According to recent research, the castle was not only a defensive bastion against pirate raids but also, especially during several centuries during the Byzantine empire, the center of a lively city with a relatively large population.It is certain, however, that Apaliros was abandoned in the 13th century when the island was invaded by the Venetians of Marco Sanudo, in the years following the Fourth Crusade.Apaliros stands as an excellent example of early Byzantine town planning. The remains of fortification walls, water tanks, storage facilities, ovens, churches, roads, an olive press and scattered evidence of some 250 homes are seen in and around the castle today.